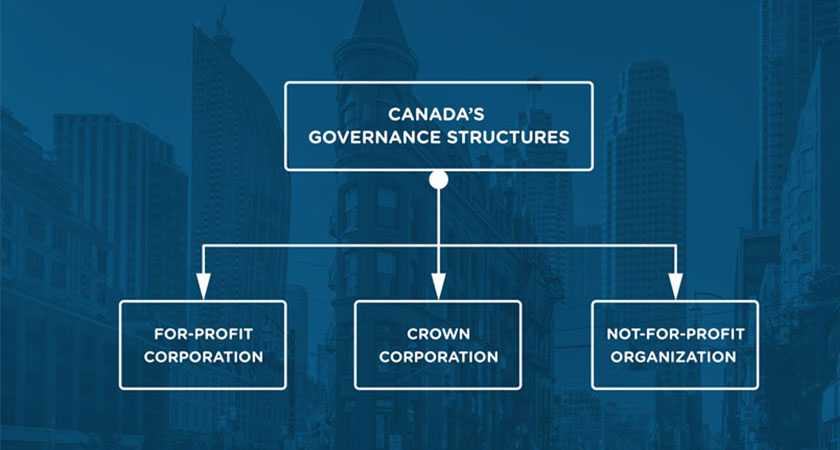 The Canadian for-profit corporate governance landscape is a hybrid between American and British models, but still being based on the British Common Law system. A Canadian board may have fewer company executives on the board than a UK board, but is more likely to have a board chair that is not the company CEO, which is typically an American practice. Legal governance management software such as DiliTrust Governance can simplify management of legal entities, representatives and authorizations; contracts, real estate holdings and intellectual property- ensuring a transparent picture for management and third-party audits.

Also called “government corporations”, these are corporations that are owned by the Sovereign of Canada, or “the Crown”. They are usually businesses or services which would not be economically viable on their own or do not fit within the scope of services that a ministry of the Canadian government would provide. Export Development Canada, Farm Credit Canada, and several national museums and galleries are examples of Canadian crown corporations. While each Crown Corporation has its own structure of corporate governance, they are given guidelines by the Canadian government which are recommended but not required.. The guidelines suggest that they report on how their own policies adhere to or differ from the government guidelines in their annual reports. The same guidelines are also provided as a roadmap for public enterprises.

Corporate governance management software must work fluently in both official Canadian languages - English and French - to be successfully adopted by a Crown Corporation. DiliTrust’s multilingual capacities ensure that this vital requirement is met.

Each Corporation Has a Unique Footprint

To book a demonstration of DiliTrust Governance or to find out more, contact us today.